This is not to cause panic or fear but as a advisory that its always a good time to be prepared for quakes.  I for one am hopeful this quake does not happen. CK

The reason that I am posting this update is due to the fact when I first began to make quake predictions one of the very first I made was on August 3rd 1979.  I called and spoke to Rick Lester at Menlo Park USGS, CA… and told him based on what I was hearing that it was a likely a quake near 6.0 would hit the area within 12-72 hrs.  The location would be between Eureka and The Bay including SF Bay proper. It could be inland or offshore.  Then the next day there was a beaching of Pilot Whales off the Florida coast and  I called back and told Rick that now I was sure that the quake would hit.   The quake hit on August 6th 1979  3 days after my initial call to Geologist Rick Lester at Menlo Park.  The epicenter was Coyote Lake CA… which is only 24 miles from Hollister, CA.. not all that far from Menlo Park.  What better way to make a point.

So today I heard about another major beaching of whales off Florida and my first thought was quake. So that it the reason I am posting this update.
Pilot Whales are very similar to False Killer whales without the white patch and their dorsal fin is different. I suspect they all hear the same frequencies.

This is not a 100% certainty nothing is, but based on past experience and the way I forecast my predictions is always based on past experience, which is all I have to go on.
Based on the numbers of ant invasions I have been written about and the ones I have here, this is another precursor, this is not to say it will be a major or even a large quake, but based on my experience with beaching’s in FL quakes almost always follow in N and or Central CA.  So the timeline I am watching is from Sunday night January 15~ Wednesday January 18th Plus or Minus 12 Hrs.

Keep in mind quakes can hit anytime with or without precursors but this timeline is what I have found works in most instances.
The quakes at The Geysers are up to 153 and once they reach 200 that is when the quakes most likely hit. An Aftershock for the Ferndale quake is due between the 11th and the 18th of January. This is one of the timelines for a/s that I have found for forecasting a/s of quakes. * A/S or a/s  ~ aftershocks *

In the past many of the major quakes like the Japan Fukishima Quake were proceeded by beaching’s in this case, there were over 400 whales stranded 2 days before the 9.0 quake.
Sign up for my Free Email Updates  charking@viser.net 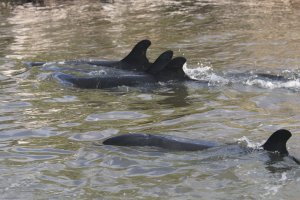 Wildlife officials have been working to save false killer whales stranded in the area of Everglades National Park.

NOAA Fisheries said that 95 of the whales were reported stranded off Hog Key on Saturday afternoon.

The agency tweeted Saturday, saying that 81 of those whales are dead, one has been seen alive and 13 are unaccounted for. NOAA and the Florida Fish and Wildlife Commission have asked for boaters and aircraft to stay away from the area.

False killer whales are named as such because of their resemblance to orcas. They are members of the dolphin family and range in size from 15 feet to 20 feet. In adulthood, false killer whales can weigh approximately 1,500 pounds.

The whales have a small conical head without a beak. Their dorsal fin is tall and their flippers (pectoral fins) have a distinctive hump or bulge in the middle of the front edge. False killer whales have dark coloration except for some lighter patches near the throat and middle chest.

I use my body to predict earthquakes and volcanic eruptions around the world and teach others how to do it as well. I have been doing this since 1976 and have accurately predicted major quakes and volcanic eruptions since 1980 with the prediction for Mt St Helens major eruption I was 12 minutes off.
View all posts by charking1946 →
This entry was posted in Uncategorized. Bookmark the permalink.

Thank you for viewing.. your feedback is welcome Cancel reply